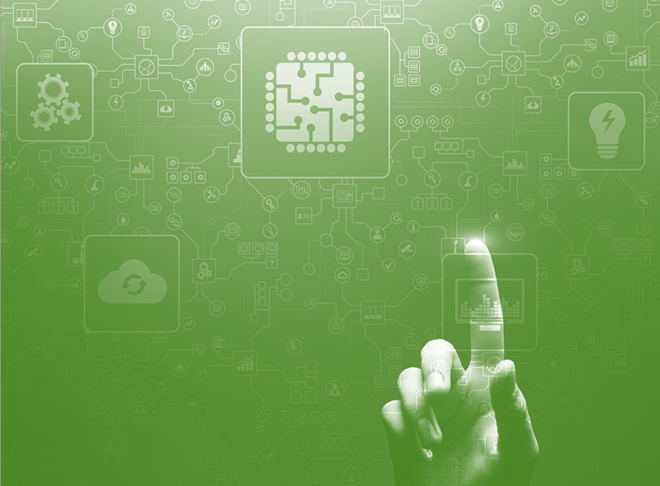 The Problem with Proliferation

As the world of sensors has grown astronomically over the last twenty years, there has been an accompanying proliferation of new sensor vendors, new sensor solutions and new ways of fusing sensor data together into unique use cases that surface the value of that sensor data. Because no single company or industry consortium has led the way with sensor standardization or with a unified solution for exposing sensor information, there has been growing complexity and fragmentation across the industry.

Today, there are dozens of different types of sensors with hundreds of sensor companies and third party vendors providing sensor-related solutions. There are thus thousands of potential supplier/sensor combinations.

Although many companies provide platforms on which sensors are sited and on which sensor data is collected, fused and transmitted, most large classic hardware-tied technology companies have had an internal lack of cohesion around sensor solutions. This has led to fragmentation of offerings between different silicon and hardware technology vendors. Things aren’t compatible or supported. This has led to a severe inability to deliver end-to-end solutions for enterprise customers. Multiple suppliers and customers have now expressed that large tech companies losing opportunities in sensor enablement on core silicon platforms and in our primary  markets of personal computing, IOT computing and emerging computing stacks.

Here’s an overview diagram that outlines how this lost value happens for large hardware-focused technology companies and their enterprise customers. 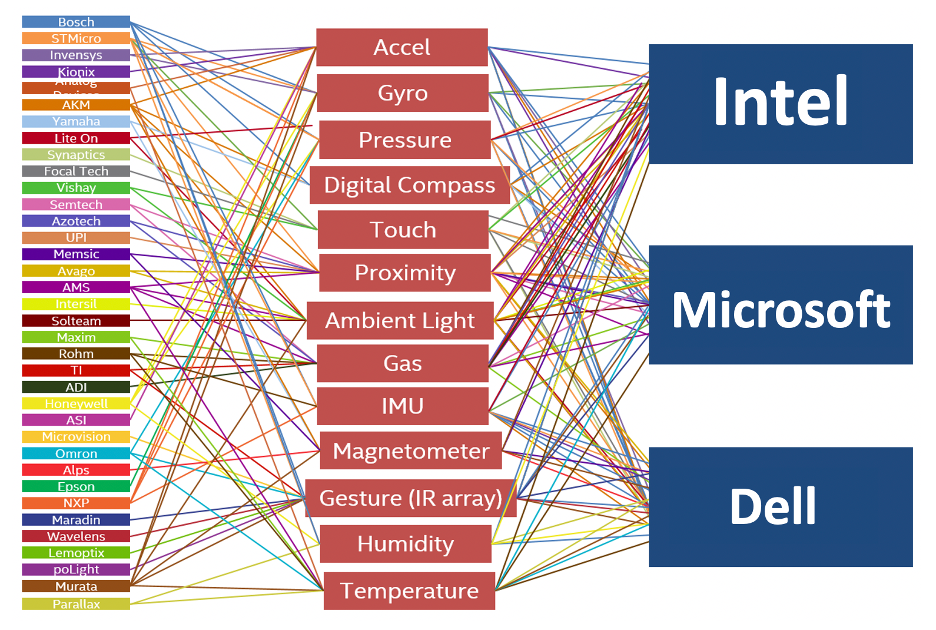 Sensors to Sensor Fusion (multiple sensors) are brought together via algorithmic methods to create Fused State Vectors or Contextual understandings of the sensor data in a more holistic perspective. From there, these higher level understandings of sensor behavior is used to create actual business value that can be surfaced on platforms or systems offered by hardware business units.

In the near term (within the next five years), there are many larger sensors – such as the ones that are found in IOT applications today – that are modeling the types of architecture and system development that we’ll see in broad deployment in “sensor dust” scenarios. Today, larger packaged sensors that are being delivered for general usage on utility poles, packaged light-bulbs, smart clothing and other standard enterprise and consumer environments are part of this long-term trend.

A good contemporary example of a single-purpose sensor with consumer applications is a low-end Fitbit or Nike device,[10] which only has a motion tracker built into it and does not contain a screen or user interface. This tracking sensor does not have high-end on-device processing capabilities of a Fitbit wristband. That sensor on a single-purpose fitness tracker is charged thru a miniature battery (or some are charged merely by motion itself) and must sync its information into a larger hub (such as a phone or laptop) in order for the information to be useful. This is a common model for this class of devices.

It is important to understand that these types of single-use sensors are moving rapidly towards smaller packages, and they are tracking towards the same sort of architectural constructs and will have the same developer usage models.

In this single-purpose world, sensors share these key attributes:

Today, many forecasts about a world filled with single-purpose sensors is focused mostly on industrial usages: analysts describe scenarios in which a single-purpose sensor reports on the incline vector of a machine on a factory floor, or a temperature sensor reports an engine variation. Reference architectures often emphasize API libraries, network connectivity and wide area network connectivity.

However, these industrial use cases are short-sighted and miss a whole class of possible new use cases that are more consumer accessible and consumer adjacent.

In the real world, here’s what one possible implementation of a consumer adjacent use case using “sensor dust” would look like. In this use case, small sensors that can capture gestures and other single-point inputs deliver data to a mobile hub that syncs with beacon responders and a cloud service for front-end visualization. The small “gas sensor” and “gesture sensor” and “smart body activity” sensors are miniaturized sensors that only deliver small bits of data to a central mobile “hub” device: 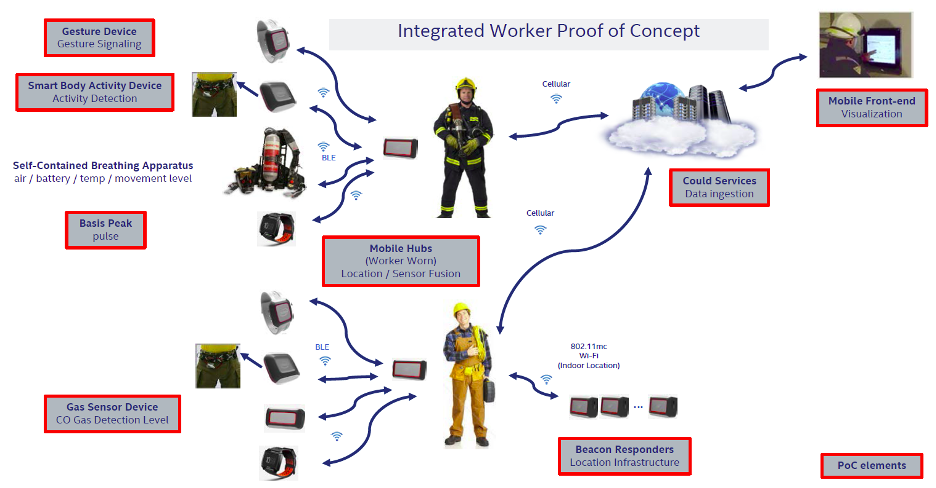