The second part of the IOT Sensor story… from past to present to future predictions. Covers the emerging ecosystem.

Sensors began as heavy pieces of machinery that documented physical changes to metal tabs, shifts in width or pressure or chemical changes to certain solutions in order to report on atmospheric conditions and human body conditions. A good example of a historical “sensor” is a blood pressure cuff: the cuff tightens and provides a reading of the pulse and internal pressure inside that tightened area. These were analog sensors.

Over the past ten years, sensors that document only individual readings from one type of data have shrunk in size and have increasingly moved from physical changes on analog pieces of machinery into highly miniaturized components that are built with specialized software on specialized pieces of circuity. Instead of requiring constant power, these miniaturized sensors have also become extremely low-powered. Some of these sensor classes require only to be charged via motion (ie in a watch or on a wrist) or via RF (radio frequency) or even via ambient light.

Moving from analog to digital sensors has accelerated the use of single-purpose small sensors without built-in logic on a board attached to the sensor. Sensors can be used identify the temperature, or air pressure changes or can detect gas in the environment. Some slightly more intelligent sensors can gather data on human proximity. But typically, many of the emerging new class of sensors are severely underpowered and constrained in their ability to gather any information. They gather a single data point and that is all: Temp = 99° / Air pressure = 200 cfm / Movement = Yes.

Examples of this trend toward miniaturized single-purpose sensors include sensors that are embedded in conference rooms detect human presence[6]; sensors in “smart shirts” to detect human motion and sleep;[7] and single-purpose factory sensors for industrial usages.[8] A multiplicity of single-use sensor types can be envisioned and are increasingly emerging from sensor ODMs and ISVs around the world.

The majority of software being used in this world of single-purpose sensors is either a lower-level specialized system such as Ardunio, with a limited instruction set or a variant of Linux, such as Yocto. Variants of Linux proliferate here, and Android (as a Linux variant) has some usage here as well.

The future model of how sensors will be used is derived from the embedded world of sensors with industrial use cases. In this model, sensors are treated as individual small compartmentalized components that exist as single-purpose “data gathering” modules.

Eventually, sensors will be dispersed like dust everywhere, gathering all the data they can find in real time. 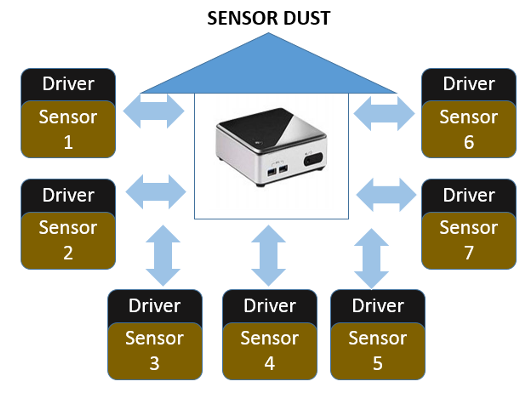 Information from individual sensors is synced (via radio frequency or other spectrum) into a central hub or a system with larger storage capacity and a larger processor that can make sense of that data and can create insights based on the inputs from these various sensors. This model came out of the embedded system world, and in this model sensors are becoming more pervasive and smaller and smaller in form factor.

Here’s one example of a pervasive sensor implementation in a house or business facility.

In this system, individual small sensors with limited capabilities provide single points of data on individual items such as whether the blinds in the house are up or down (Blind), whether or not the fan is running (Ventilation Fan), the On/Off status of the light (Lighting), the connectivity to local systems via IR (IR adapter), the phone status (Interphone), and a temperature reading (PTC thermistor overheat sensor), the motion and passive detection of the presence of a person in the room (IR Pyroelectric), and a shock sensor for intrusion detection (shock). All of this sensor information is fed via local WiFi or other methods to a local ZigBee gateway device. In this instance, the processing of this data can be done to some degree on the local ZigBee gateway device, but more processing – with aggregation from multiple buildings – can continue in the Internet cloud.

Many hardware-focused companies (such as Intel and Microsoft) are working hard to penetrate this market, but these companies are today facing an uphill battle because of the vast panoply of existing embedded system vendors, and the fractured nature of this pervasive sensor market.

The architectural stack in the new world of distributed sensors typically looks something like the diagram below (the architecture is generalized away from specific hardware or software implementations, to represent activity at each level in the stack).

Applications are developed that show off experiences like showing your fitness activity that use middleware (usually Linux today) that stores data in a DB and uses machine learning, predictive algorithms and data modeling.

There is very little compute on the device. And making sense of all the data from these pervasive sensors is a hard problem to solve for vendors who have historically had many layers of compute to manage I/O. 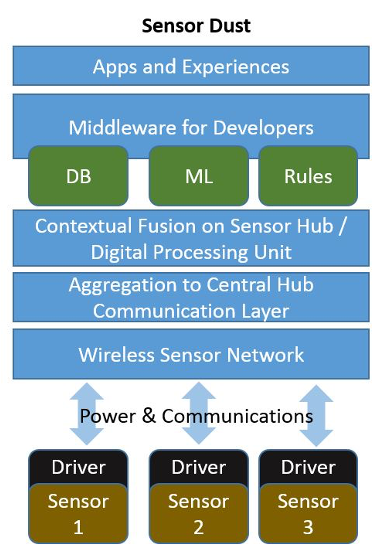