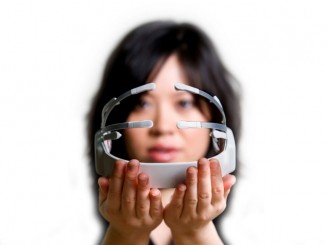 Brain interface glasses! I have to admit this has been my ultimate dream, for a long time. In fact, I even wrote a chapter in my technology book about “invisible” or nearly invisible interfaces as the wave of the future. In February 2008, there’s finally a high-fidelity brain to computer interface — they even have an acronym (BCI)! As the article on GizMag points out, we may think we’ve come a long way, but the keyboard and mouse remain the predominant way we interface with computers. We’ve had the unfulfilled promise of handwriting and voice recognition and hope that something better will come along sooner or later. Perhaps this is it – brain computer interface technology pioneer Emotiv Systems will have its EPOC neuroheadset to market before Christmas 2008. The lightweight US$300 EPOC is, worn on the head but does not restrict movement in any way as it is wireless. The set detects conscious thoughts, expressions and non-conscious emotions based on electrical signals around the brain. It opens up a plethora of new applications which can be controlled with our thoughts, expressions and emotions.

The Emotiv EPOC will be the first high-fidelity brain computer interface (BCI) device for the video gaming market when it becomes available to consumers via Emotiv’s Web site and through selected retailers in late 2008 for a recommended retail price of $299.

The company is also opening its Application Programming Interface (API) and providing a range of development tools to enable developers to integrate neurotechnology into their applications. The initiative will spur the adoption of brain computer interface technology in video gaming and other industries, enabling consumers to experience an entirely new form of human-machine interaction.

The Emotiv EPOC detects and processes human conscious thoughts and expressions and non-conscious emotions. By integrating the Emotiv EPOC into their games or other applications, developers can dramatically enhance interactivity, gameplay and player enjoyment by, for example, enabling characters to respond to a player’s smile, laugh or frown; by adjusting the game dynamically in response to player emotions such as frustration or excitement; and enabling players to manipulate objects in a game or even make them disappear using the power of their thoughts.