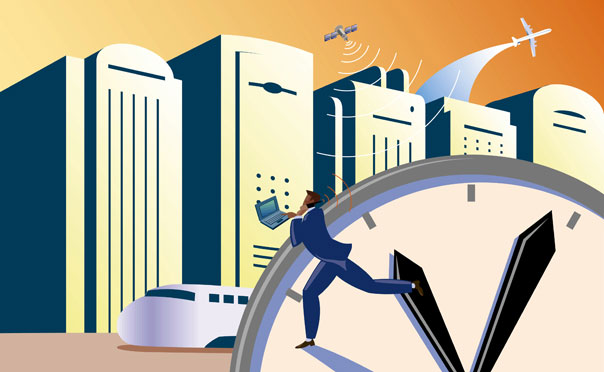 For two years, technology product manager Ned Hayes would rise before the sun at 4 a.m. every Monday to drive to SeaTac airport from his home in Olympia. He would hop a flight to San Jose, Calif., and arrive at his workplace in Palo Alto just in time for the weekly 9:30 a.m. team meeting.

For two years, technology product manager Ned Hayes would rise before the sun at 4 a.m. every Monday to drive to SeaTac airport from his home in Olympia. He would hop a flight to San Jose, Calif., and arrive at his workplace in Palo Alto just in time for the weekly 9:30 a.m. team meeting.

To stay in touch with his family, Hayes read books to his two children over video chat and spoke with his wife using Skype. He returned home on Wednesday or Thursday night in time for dinner.

Despite the difficulty, Hayes says this ultra-long-distance haul was still easier than when he commuted from Olympia into Seattle daily for a previous job. “I got better sleep when I wasn’t getting up at 5 a.m. every single day for the back-and-forth drive to Seattle,” he says.

Enter the rise of the supercommuter: an employee who works in a metro area but lives beyond the boundaries of that area, requiring a commute into the workplace via air, rail, car, bus or combination of modes. That’s according to the New York University Wagner School of Public Service, which produced a 2012 paper on supercommuting trends.

As the report states, “supercommuters are well positioned to take advantage of higher salaries in one region and lower housing costs in another.” In a tight labor market and difficult housing climate, it may not be possible to sell a house or simply find another job.

King County is noted as a region with 71,000 supercommuters, among the top five U.S. counties with a high rate of supercommuter growth. From 2002 to 2009, Yakima to Seattle alone saw a 131 percent increase in supercommutes (an additional 3,000 commutes).

How best to manage a long-distance commute? There are several approaches, says Terry Pile, a Seattle-based career adviser. She knows an employee of the University of Washington who lives in the Darrington area but keeps a small apartment near the university instead of wrangling up to 90 miles of traffic each way.

Similarly, Aaron Tinling lives in Port Townsend and commutes into Redmond every week to work at a large software company. Tinling eventually rented a room in a Redmond house for his four-day shift to cut down on the two- to three-hour drive (each way) required for work.

Other supercommuters may ask for a compressed work week, like Hayes. “It depends on the job, but you can also ask to telecommute for a day or two,” Pile says.

Take advantage of the time during the commute, Hayes suggests, whether it’s reading, working or catching up on sleep that may be cut short by long-distance commutes.

Tasks that stretch your creativity can be accomplished during the commute, too. While riding the Sounder train daily for the Tacoma-Seattle leg of his former Olympia-Seattle commute, Hayes wrote a book, “Sinful Folk,” which was eventually selected as a quarterfinalist in Amazon.com’s Breakthrough Novel Award Contest.

But any supercommuter trend may fall victim to the burgeoning economic recovery.

During the most recent downturn, employees hung on to jobs longer than they wanted, Pile says. Examining core values (income, personal time, work/life balance) may help many decide that a long commute may not be worth the money, “other than as a temporary stepping stone to a better job,” Pile says.

As for Hayes, he eventually decided that living and working in two different states offered too much stress for too little reward. He now works just 15 minutes from home.

King County, the center of the Seattle-Tacoma-Olympia statistical area, had the third-fastest rate of growth in supercommuting in the country from 2002-09, behind Houston and Los Angeles. The top areas of residences and number of supercommuters to King County: