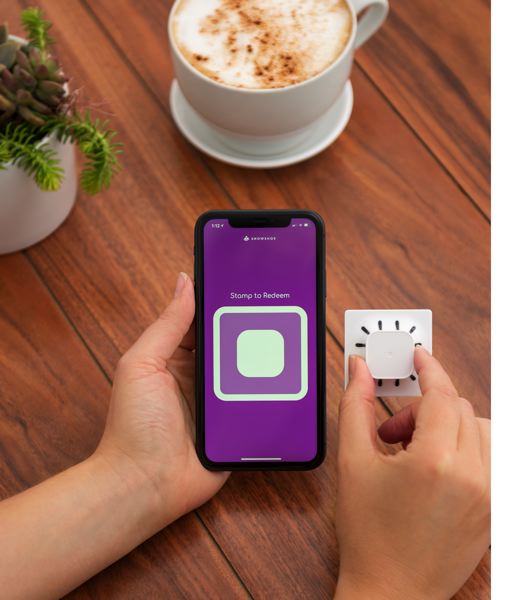 SnowShoe’s new CEO, Ned Hayes, says one day we will go to concerts again, and business conferences, and sporting events, and rallies — and we’ll be able easily to show our credentials on our phone. In the meantime, let’s get that 10th coffee card stamp.

SnowShoe, like Digimarc and SureID, is in the business of physical presence systems for mobile event authentication. In a meeting with the Business Tribune via Zoom, Hayes showed SnowShoe’s best-known device, a plastic rectangle with a small handle. (It looks a bit like an ink stamp.) Users hold out their phone to the person acting as the ticket taker, who stamps the screen, verifying whether they can enter the building or event. There’s also a handsfree, COVID-safe version that attaches to a point of sale/cash register, rolling out in 2021.

The stamp does not need batteries. It charges on the capacitive interface of the smartphone screen itself. They have been used in mass transit before, but a more common use is at a trade fair to collect contact information for likely customers.

The company says more than 30,000 proprietary SnowShoe capacitive touchscreen stamps have been deployed worldwide to over 3,000 developers. Clients include Red Bull, Disney, and The Game Awards. The technology is protected by 17 patents and multiple trade secrets.

“We were really targeting loyalty and retailing just before COVID hit,” said Hayes. “We’re switching gears to provide a kind of COVID-safe version.”

The product coming out in February is called the tiny kiosk version. It has magnets on the back to stick it to a pay register, making it easy for someone buying something with their cash card or phone to log in to their loyalty card using SnowShoe. The theory is, whether it’s their tenth cup of coffee or their weekly grocery shopping trip, it will be a little easier to connect.

Currently, Hayes is the only one going into the SnowShoe office near the Amtrak station in Old Town. It’s a business-to-business company without a storefront.

“We are a provider of technological innovation to retailers and loyalty programs; we don’t mandate how they have to use it. We just create wonderful things,” he said.

Shopping habits — like eating habits — are hard to change. You have to make it fun. In Hong Kong, one mall added the SnowShoe system to every store in late 2019 and launched it with a scavenger hunt.

Hayes was hired for his identity and access management background — especially with ShareID and TeleTrust, both known for biometric authentication.

The COVID-19 pandemic has changed things.

“Before COVID, we were oriented at retail. Since then, we’ve gotten a lot of interest from companies that want to continue to support loyalty programs but don’t want their associates taking a card from a customer and stamping it, and giving it back. Those are potential COVID vectors of transmission.”

As for whether the system could help identify people who have had the COVID-19 vaccine, giving them access to crowded rooms, Hayes said they are in talks with “a couple of major clients” but would know in a month. “We’re very much wanting to provide validation for health care companies, and if somebody has entered an area or not entered an area.”

It’s a simple one-hour coding job to enable a mobile web page with a capacitive screen to react to the stamp.

“It’s just a couple lines of code, but it’s fraud-proof,” Hayes said. “This is a mathematical algorithm that extends to hundreds of thousands of possible variations.” It uses an encrypted database and Microsoft Azure’s protections on identity management to avoid duplicating users.

Having all those patents “makes it very hard for somebody else to duplicate what we’re doing, because our intellectual property is protected. I believe that really raises our evaluation,” he said, adding that they are venture-backed and trying to raise more money in 2021. So far, investors have been from the Silicon Valley and the east coast, but they are also looking at Portland.

Having worked locally in tech, Hayes is expected to attract local investors and talent. (After cutting back staff when COVID-19 hit, the company is hiring again.) He cites VeriSign, Intel Identity Cloud Service, and Autodesk as sources of talent.

Hayes was a manager at SureID, where he upgraded the system for secure biometric authentication, which is now used at UPS stores. Before that, he worked on Intel’s sensor and retail systems and startups ASAPP (New York), TeleTrust (Seattle), and Identity Locker (Portland.) He also served as New Product Innovation Manager at Vulcan Labs in Seattle.

Talking about whom the firm hopes to attract, he said that “in order to really be effective at SnowShoe, and to take our technology to the next level, you have to love mathematics.”

“We have the capability of changing the world here in Portland, partially because of the people, but personally, I think we have a culture of innovation — it’s in the water.”

Hayes is hopeful SnowShoe will be able to help retailers bounce back from the pandemic slump: “Hopefully this time next year, this will be the roaring 20s. Our job is to make that happen.”

With the other dozen staff members working remotely (he bikes in along the Springwater Corridor), Hayes has found that remote workers can be very productive. (They are big users of Slack.)

“We’ve seen people’s productivity actually go through the roof, as we’ve been able to provide more flexibility with remote work and shift hours or allow people to take the time they need to take care of their family,” he said. When COVID-19 is gone, they will still keep at least one day a week as a remote workday.

He does miss whiteboarding sessions and brainstorming. Even Google Jamboard is not good enough.

“That’s the one thing I miss, being able to sit in a room and really discuss something a little bit harder,” he said. “It’s not the actual technology so much as the chemistry of the room is different. People can’t just point to something and say, ‘I’m talking about that.'”

SnowShoe is a Portland-based company that developed the first breakthrough capacitive touchscreen technology to capture and transmit unique authentication events. The company has been hailed for bold innovations in hardware design and pioneering technology innovations. SnowShoe’s technology is protected by 17 patents and multiple trade secrets.