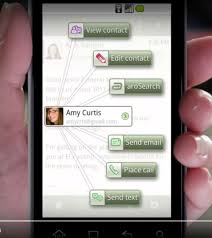 I’ve been really excited to see new innovations in interaction with phone, mobile device and wearable interfaces lately. Some of these innovations are doubly exciting…. because I helped invent them, seven years ago, and these new ways of interacting with data and with devices are only now coming to the mass market.

For example, it was fascinating to have Walt Mossberg trumpet the praises of the iPhone 6S this week at Apple’s launch event.

Anyone who thought there was no more fundamental innovation to be wrung out of the smartphone is just wrong. The 10-finger multi-touch interface made mainstream by the iPhone 8 years ago has now taken a leap forward with Apple’s 3D Touch. This lets you view content in apps without opening them, quickly perform common actions, and generally manage your smartphone more smoothly by simply pressing a bit harder than usual on the screen. In brief use so far, I found this both highly useful and delightful — exactly the reactions Apple loves best. I expect to use it many times a day.

Exactly right. And my stellar team at Vulcan Labs (under the Kiha/ARO product name) invented most of these user experience innovations…. six or even seven years ago.

You see, innovations like this don’t emerge one time or in one place. They percolate around the edges — and in the Labs — of various teams of collaborators for many years before finally, someone gets the budget, the right partners, and the clout to bring them to market in a fully productized and completed product.

Here are some examples:

Let’s go thru the details on these “new” innovations, point by point.

Right now, they are using this only on browser pages on the on-device Safari browser. I wouldn’t be at all surprised if they eventually got around to our implementation model, where every recent app on the device can be browsed in this flip-book fashion.Here’s the Apple version, side by side with our original version, as available in press ready presentations since 2009 or thereabouts.

I’m very happy to have been part of extremely collaborative and innovative teams at Vulcan Labs and Xerox PARC who invented many ideas similar to those now emerging in the Apple iPhone 6 and the Samsung Galaxy and other extraordinary new devices like the Apple Watch and the Basis Peak.

In fact, here’s a (somewhat cheesy) video of the whole user experience in action.

Some of the smartest people I’ve ever worked with invented user experience innovations like this — people like Phil Rogan and Koush Doutta – and great product/program managers like Mike Zimmerman, Kristi Gray and Gus Iverson helped to refine and deliver as part of a cohesive product vision for interaction and control of information on a “smarter” device. The initial proposal we created was comprehensive, and pre-dated the current user experience of the iPhone, as well as the emergence of Android.

I’m not comparing these products out of some misplaced animosity towards Apple. Far from it — I applaud their marketing and their acumen in bringing to market innovations that various teams have worked on for many years. I’m just pointing these comparative examples out because non-technical people may feel like ideas and technical innovations emerge perfectly formed, like pure eggs from the mind of a genius like Steve Jobs or Bill Gates.

But I can’t claim to be the only inventor… and neither can Apple.

I hope this sense of perspective and history gives people an appreciation for the many decades of collaboration and innovation that lead to ground-breaking products.